April 17, 2018
Catholicism from another perspective – this is how I understand the pilgrimage site of MonteMaria in Batangas City, Philippines. It was a huge site development project with the 96-meter tall Mary, Mother of All Asia statue as the centerpiece. You have to see it for yourself to believe!

What (not Who) is MONTEMARIA?
Just for clarity, MONTEMARIA is the name of the 130-hectare township or development site project. Also, Montemaria is a place in Batangas City to which the site more likely is named after. The statue or monument or tower is called "Mother of All Asia - Tower of Peace". You may simply call it Tower of Mary or Statue of Mary. The surrounding place meanwhile is known as the Mother of All Asia Shrine.


Holy Week in the Philippines
We visited this place during the Holy Week of 2018. During this week, many Filipino Catholics are visiting religious places which is part of what they call "Visita Iglesia". It is not uncommon for a pilgrimage site like the MonteMaria to be filled with devotees, pilgrims and travelers from different parts of the country. And we are among of those travelers.

After our Lobo, Batangas outing, we traveled back to Batangas City and did a stop-over in this marvelous site. The statue is really eye-catching. There was a point during our travel where you can clearly see the monumental structure erected on top of a hill or plateau facing the Batangas Bay. And that was an amazing view. Take a look at these photos.

The parking space is really huge, as in there are parking lots almost everywhere. Going up there, to the Mother of All Asia tower or monument requires a bit of sacrifice, some uphill climb. But I bet even if you’re a veteran or a senior citizen, it doesn’t matter – you can be there for sure. The wind is blowing gentle-to-fast so you don’t have to worry about sweating as well.

With hundreds of steps, your knees will be quite tested but you are free to rest anytime of course. Well, pausing your walk from time to time seems to be an automatic reaction as the breathtaking views are always there to grab your attention.

Yes, take a selfie or groupie and then walk, and then same routine again. You’ll then notice you’re almost there. The view of the ocean and the afternoon sunset seems to soothe the mood of the MonteMaria visitors. Cool wind and mild heat from the sun gives energy rather than tiredness or fatigue.

When you look at the far distance, you’ll see the Verde Island and the town of Tingloy. Then on the sea are tiny boats and ships heading towards their destinations. While the main site seems to be lacking on trees, the nearby mountains and hills are full of green vegetation. 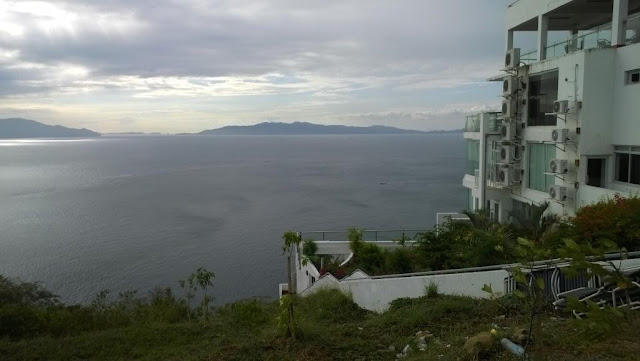 As it was Holy Week, you’ll witness a few acts of the Filipino Catholics to commemorate this Catholic Christian tradition. Inside the podium, where the Mary statue stood still, you’ll see some devotees on their prayer rituals. Others are just there to observe. The statues or images are covered in purple blankets as this is how Holy Week is done the Catholic way.

MONTEMARIA - A Master Development Project
While we are there to simply witness the reality of the 96-meter tall monument of Mama Mary (Mother of All Asia as they call it), I couldn’t avoid thinking on why it was built right here. As I observe the surrounding for a few more minutes before we leave the place, I noticed and there is somewhat a masterplan considering the location of the streets and structures. I proved myself right on that idea when I got the chance to Google the MonteMaria site a few days after. Simply put, everything you need to know about MonteMaria pilgrimage center is right here:

It will only take you 30 minutes to get yourself familiar with the MonteMaria pilgrimage site. But it could become even more minutes or hours to spend in the coming years when the site is completely developed. At present, within a few minutes of relaxation and observation, you’ll get to figure out the wonders of Batangas Bay, which probably is also one of the main reasons this was the chosen location of the MonteMaria Memorial Complex project.

Before we leave the place, I took a few more photos that somehow formulate bigger questions inside my brain. I want to share my opinions about them. Here they are.


Batangas is home to many power plants and JG Summit Petrochemical Plant is one of them. At the nearby barangay Ilijan, southern part of MonteMaria, is the Ilijan Power Plant. Such a strategic location then for the MonteMaria Memorial Complex project for businessmen, working professionals, and investors are just minutes away to their soon residences. This idea will benefit both the local government as well as the local communities in terms of business opportunities. I am just puzzled. What will be this mega project’s long-term effect to the surrounding environment and ecosystems?


Batangas City is located along the Batangas Bay, a seascape full of marine biodiversity. Batangas City International Port is also located here and is a big contributor to the economic progress of the region. Hundreds of ships dock at this port everyday. With MonteMaria soon to rise along the bay, there will be more reasons for the Batangas economy to prosper for it will attract even more ships to dock and share their part. On a different perspective, could the Batangas Bay sustain its marine ecosystem from the challenges of a booming Batangas economy in the near future?


With Mother of All Asia - Tower of Peace monument as the forefront architectural wonder of this memorial complex project, and a Catholic Church to oversee the religious activities, there seems to be a good chemistry behind all of this. Real estate market is unquestionably performing great in the Philippines. While religious sites open to the public namely the National Shrine of Saint Padre Pio, Marian Orchard, and Caleruega Church have been there for years in the province of Batangas, this blend of real estate business and religious matter is one of its kind in the country - at least from my perception (I might be wrong).

Abacore Capital Holdings, Inc. and Montemaria Asia Pilgrims, Inc. are working hand in hand to make this project successful. What do you think of this kind of business model and its impact to the major religion of the Philippines - Catholicism? What is its positive or negative (if there is) impact to the Filipinos?


An Architectural Wonder of Modern Catholicism
In some respects, those are the questions that maybe are your questions too. Just to be clear that MonteMaria as a pilgrimage center being developed to attract devotees and pilgrims is in a religious point of view worth commending.  I wrote a post about “the beauty we must see in all religions”. Could MonteMaria be that another one that shows beauty about Catholicism or Christianity in general?


The visit to the site is somehow worth remembering, with a big monument of Mary first time to see up close and personal. Though I have seen a similar huge statue before, the Kamay ni Hesus in Lucban, Quezon, it was really awesome to see a taller one like the statue of Mary.

How about you? What is your say about the MONTEMARIA pilgrimage center? What are your questions. Please leave your comments below.

Related Posts
Lobo, Batangas – a Place of Wonder and Simplicity

The Summary of the Filipino People