November 03, 2017
In 2016, my friends traveled to the northern part of our country – in Ilocos region. The views there are truly amazing, so I decided to create this post about Ilocos Norte. No wonder, some of the places I am going to share here do exists in the Philippines for centuries. Yes, that old! Not only that, I researched more facts about these places that may help you appreciate more the beauty or importance of them.

Ready to be fascinated? Here we go.

Sand Dunes, Paoay, Ilocos Norte
The Sand Dunes in Paoay Ilocos Norte is in some ways comparable to the desert safaris found in Dubai, Abu Dhabi and Marrakech. Land cruisers or 4x4 rough terrain vehicles will tour you around the dunes. The place is also known as the Ilocos Norte Sand Dunes (INSD) and is considered a National Geological Monument. The locals call it La Paz Sand Dunes or Bantay Bimmaboy. Notable feature of this tourist destination is that it is an 85 square kilometers dry zone facing the West Philippine Sea. Today, adventurers can do a lot of activities like sandboarding, ATV ride, photography and of course the thrilling ride on 4x4’s! 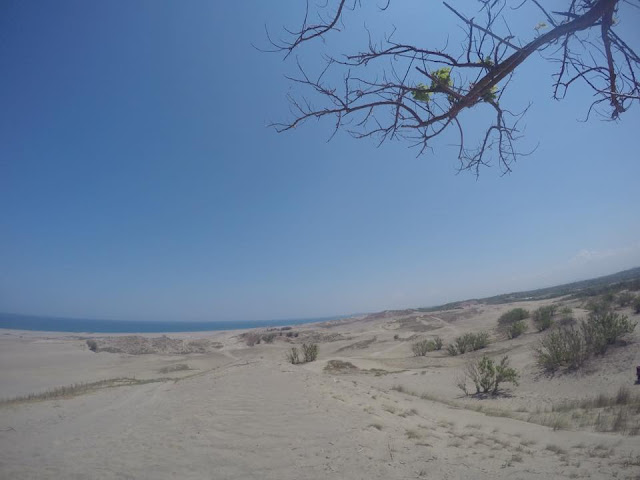 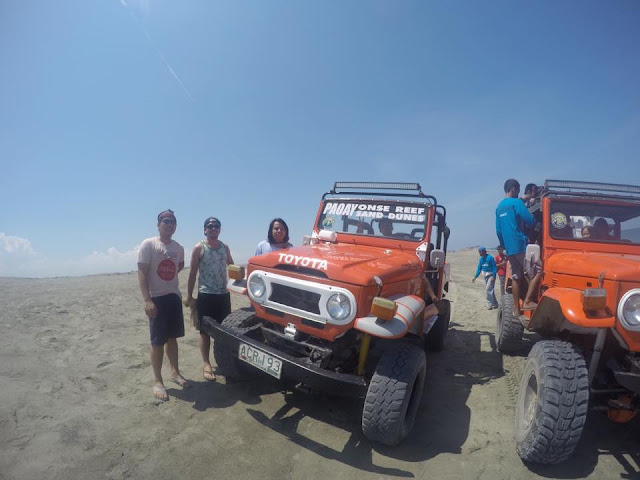 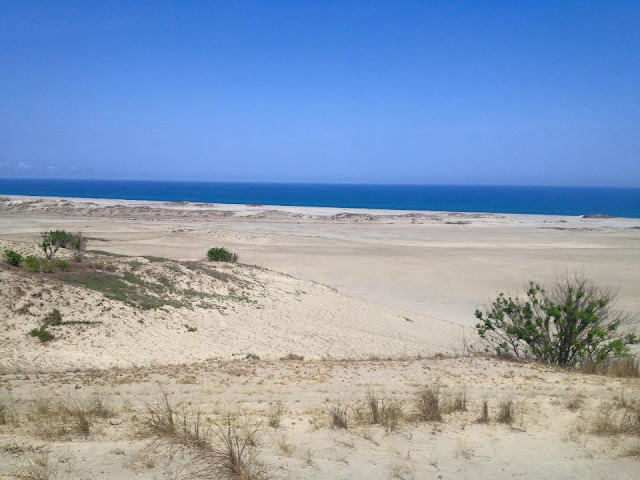 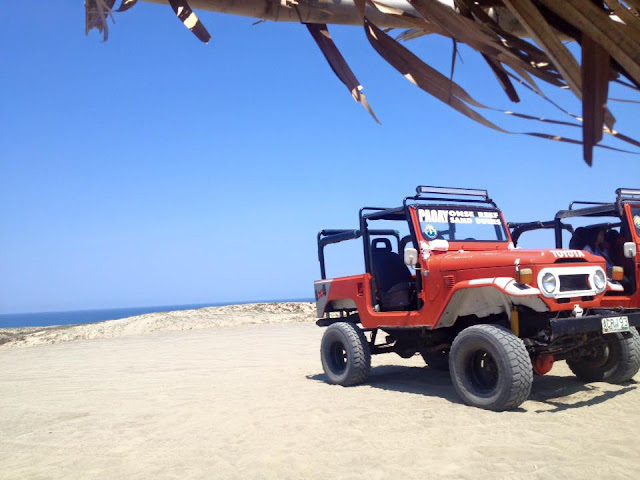 Interesting Facts
Paoay Sand Dunes has been the setting of various local films. With the increasing number of visitors in this monumental site over the past years, the Ilocos Norte provincial government is grabbing that opportunity by showcasing Ilocano’s artistry and love of the environment. “Himala sa Buhangin” is a festival that relives not only the popularity of Paoay Sand Dunes but also the culture and tradition of the Ilocandia. An Interactive Sculpture Park is the highlight of this festival where artwork installations by various groups can be seen. The festival is held in the month of May. Why not mark this event on your calendar now so your next Paoay Sand Dunes trip would be truly interesting .

Paoay Church
The Paoay Church has been there for over three (3) centuries and therefore considered as one of the oldest churches of its kind. Famous for its beautiful European Baroque architecture, the church is not only a place of worship for most of the Ilocano Catholics but also a top tourist destination of people from around world. And the main reason for that is because Paoay Church is a UNESCO World Heritage Site. On the photo below, it is inevitable to pose for a souvenir photo with the huge word “PAOAY” and the church at your background. Then this painting of the Paoay Church is truly something notable to the curious eyes. 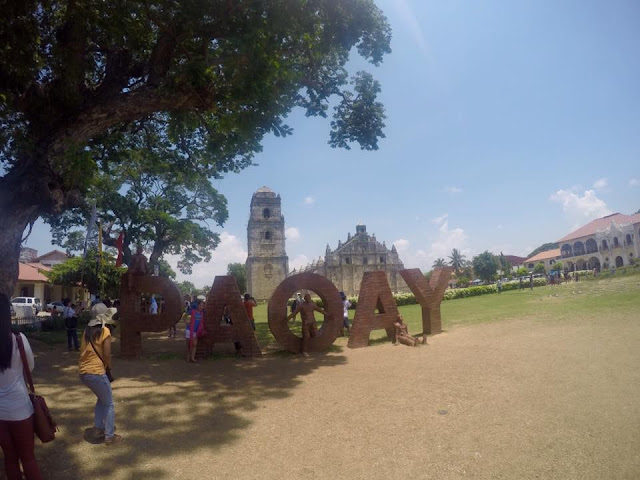 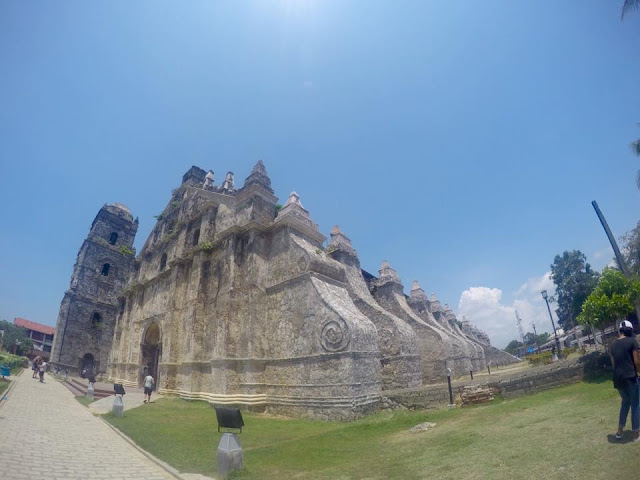 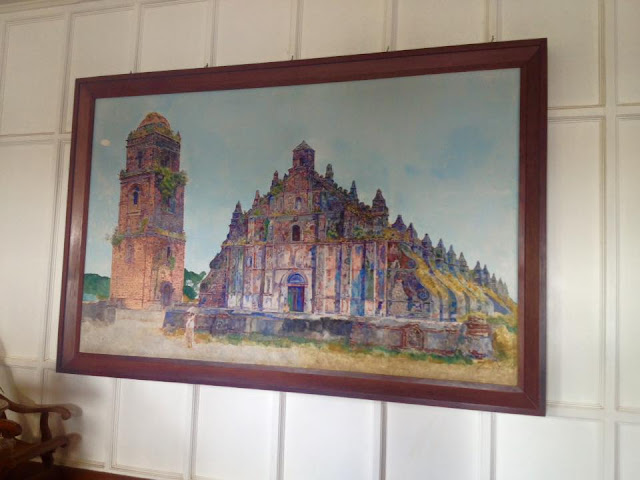 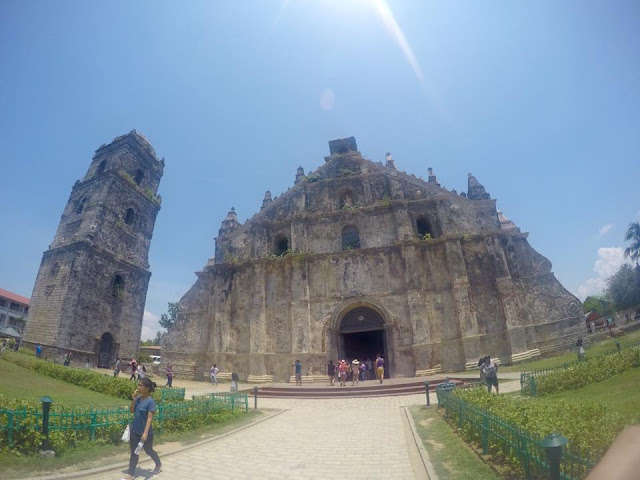 Interesting Facts
The real name of Paoay Church is Saint Augustine Church and it is a property of the diocese of Laoag, Ilocos Norte. It’s a Catholic Church and is actively holding masses for the churchgoers. This church is also a National Cultural Treasure of the Philippines. Old churches like this is a product of the Spanish colonization of the country for over 300 years. While Catholicism introduced by the Spaniards is the religion of the majority of the Filipinos, is it worth knowing that churches like these are also dumb witnesses to the oppressions brought by those colonizers. Notably, according to historians, the church’s bell tower serves as an observational post for Filipino revolutionaries against the Spaniards in 1898. You may also want to see the old Catholic churches in Cebu City I wrote about in my previous post.

Bangui Bay Windmill, Ilocos Norte
It feels like you’re somewhere in Denmark, New Zealand, or Europe when you happen to be near these gigantic wind turbines. Probably the first of its kind in the Philippines, Bangui Windmills is amazing in two ways. First, it is truly a perfect place to visit and see those long blades rotating gracefully against the western winds blowing from the Philippine sea. Second, these wind farm is capable of producing up to 33 MW of electricity sufficient enough to power up thousands of households in the Ilocos province. This windmill attraction is almost a decade in the making. The good thing about this technology is that it is slowly being developed in different areas in the country these days. 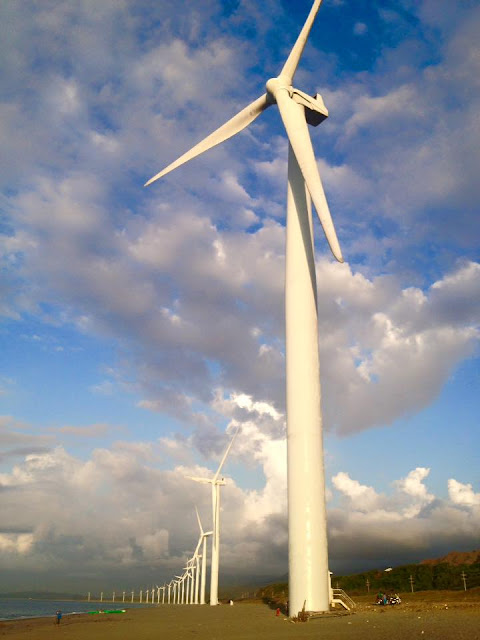 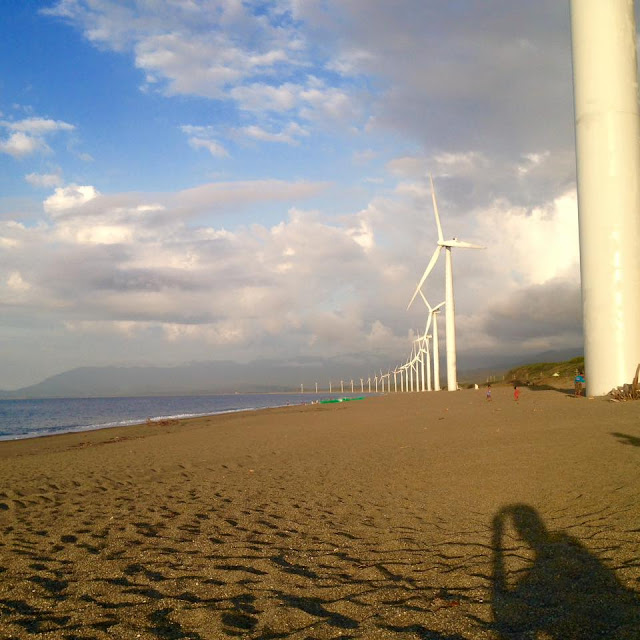 Interesting Facts
The installation of this wind farm in the province of Ilocos Norte was made possible by the partnership of the NorthWind Power Development Corporation, a Manila-basec energy company, and Vestas Wind Systems, a Danish energy firm. The project was called Northwind Bangui Bay Project and it started in 1996 with an initial budget of $48 million dollars. Completed in 2015, the windmills now supply power to Ilocos Norte via the Ilocos Norte Electric Cooperative (INEC). Interestingly, experts estimated that the windmills would reduce 1.2 million tons of carbon dioxide and other greenhouse gasses in the atmosphere within the 21 years duration of the project. Just imagine if each province in the country has its own windmill project like this one.

Pagudpud
Pagudpud – sounds very familiar, right? Municipality of Pagudpud in Ilocos Norte is the northern most settlement in the island of Luzon. Why not try to get a map and verify this? Coincidentally, this town is also home to beautiful beaches, forest rivers, and magnificent shorelines. And to prove this claim, below photos show six of the most-visited places in Pagudpud. They are the Kabigan Falls, the Patapat Viaduct, Saud Beach, Bantay-Abot Cave, Cape Bojeador, and the Kapurpurawan Rock Formation site. Here they are. 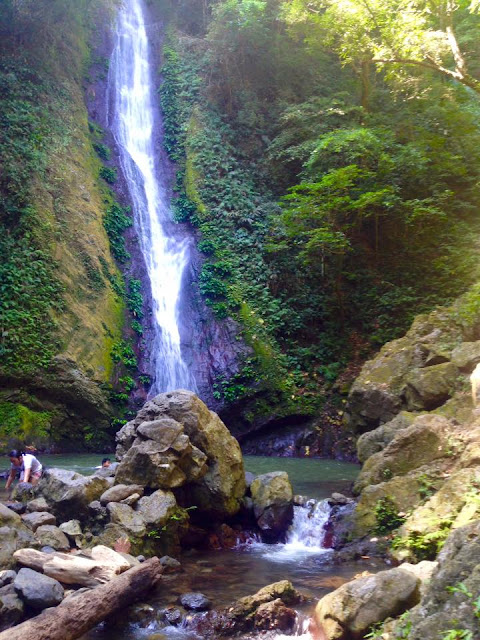 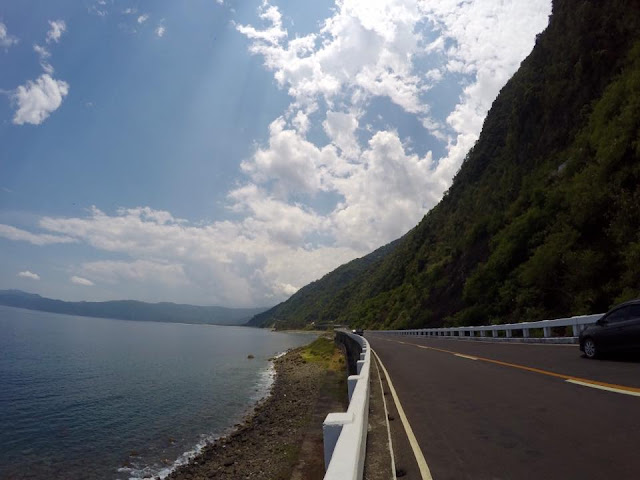 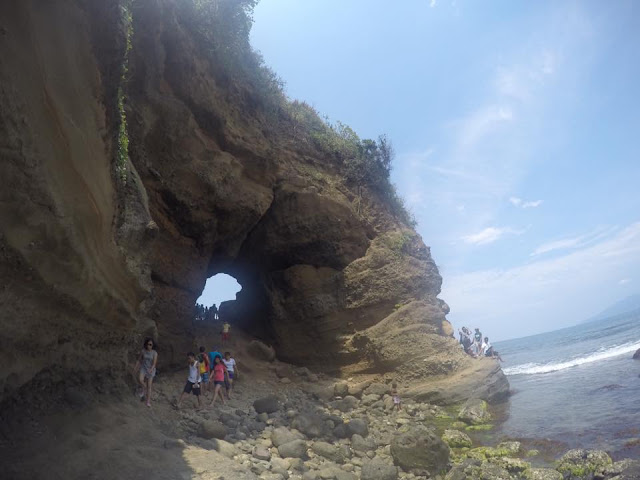 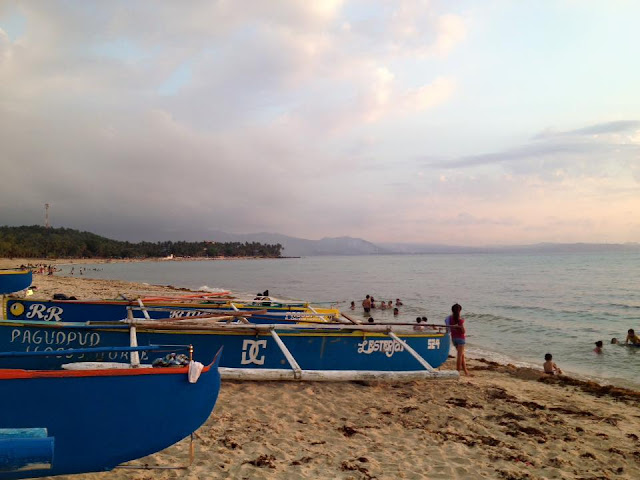 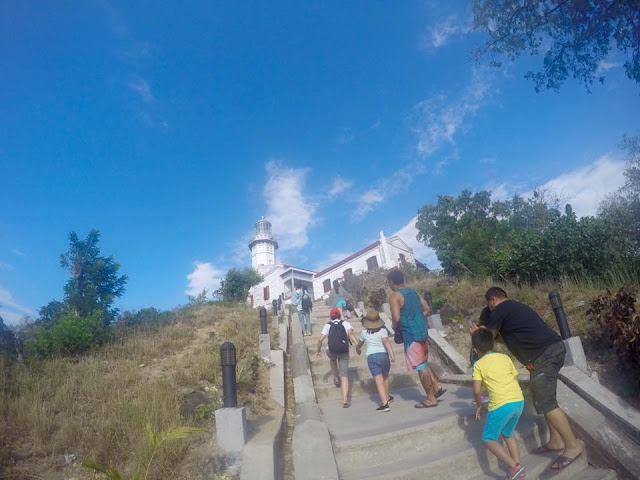 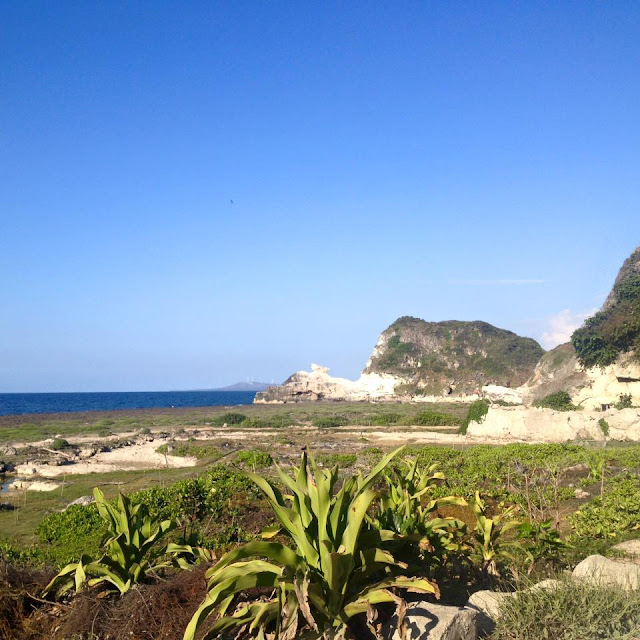 Interesting Facts
“The Boracay of the North” – this is how they also call Pagudpud. Another interesting fact about Pagudpud is the “Kangayedan Festival”. Celebrated during the month of April, among of the highlights of this festival are the parade of cultural dances, trade & tourism fair, beauty contest, balikbayan night, coco food fest, sports fest, matinee shows, water sports, and goodwill games. Kangayedan Festival is celebrated to showcase the natural resources and products of Pagudpud. If you want to know more about the Ilocanos way of life, then it’s great to be in this festival soon.

It really feels good to know that awesome attractions like these can all be found in just one province in the Philippines, at Ilocos Norte. But wait, there is more on part two of this post!

Credits: Photos of Ilocos Norte I shared in this post are courtesy of my friends Joan and Philip. The couple, together with our college friends, traveled to Ilocos Norte on April 2016.

Exploring the Beauty of a City in Progress - Naga City, Bicol, Philippines


About this Post
Speaking of more interesting facts, more of it will be shared on part two of this post. I will be sharing more photos of a few more top tourist destinations in Ilocos Norte. This post not only promotes the beautiful country Philippines. It also reveals the culture and tradition of the Filipinos, be it bad or good.

It would be worth the subscribe in this blog site for you will get to know more the underlying stories behind each place in the country. Just like the related posts above, why not give them a few minutes to read and discover those facts.

For comments and suggestions, please leave them below. For more information, you may also contact Noriel Panganiban, the author.

May 27, 2022
It is great to live our lives in the way we want it, that's true. However, more often that not, it doesn't really happen based on our plans, even from our brilliant ideas. Life as I learned it, works differently in this world. There are factors that makes life happier, sad and sometimes beyond our expectations. But why don't we look at it in a more positive and engaging way, despite the odds out there. I mean, if something makes you happy, why don't we focus on it rather than on the ones the stops you from doing so. Let me share my experiences as an example. In 2019, everything is just a dream. Like on this first photo, this is just the simple dream - a simple house in the bukid. The First Papaya Then about 4 years later, this red ripe papaya was the first of its kind to be harvested in our mini farm here in Taysan, Batangas. A lot of things, good and bad, happen in between. And this cute little dog we named "Oki" or "Okee" or "Owky" sudden
Post a Comment
Read more