December 22, 2018
This blog post is in memory of Kapitan Eddie Panganiban who lost his life as a good public servant, a kind father to his barangay, a person who cares for the benefit of everyone.

Who is Kapitan Eddie?
Kapitan Eddie is the chief captain of barangay Panghayaan, Taysan, Batangas in the Philippines. A big part of his life was spent as a public servant, from councilor to chieftain. Earning recognition and applause from people who knows him from the inside and out, our beloved kapitan is known for his kindness and care among his constituents. He is known to help people in need. His significant projects and personal actions in his baranggay are exceptional, always sided for the benefit of the masses. On December 22, 2018, he was brutally killed in his residence. Many expressed their disbelief in the incidence. The life of a good kapitan was just taken that quick.

Allow me to share this short story of how Kapitan Eddie was able to extend his help to my personal life.

When I got diagnosed with a heart-related disease more than two years ago, I thought that was the end of me on this world. Every time I am in that dying seconds, gasping for air but it was too thin that almost nothing enters my lungs, I am saying to God, “God, I am entrusting my life to You”. Somehow, I felt how it was to die, though I survived it. Lucky I was, everything had changed. God decided to let me live, even reversed the diagnosis from heart-related disease to a stomach intense-hyperacidity problem. A few years after, I am well, back to normal breathing, normal life.

I shared that experience for I want to pay tribute to the man whom became an instrument to my healing. Though it was not direct, what he and his family did brought significant impact to my life. Let me share that story.

One month after my hospitalization, I was crying while talking with my mother on phone. I told my Inay, “maybe you can find someone to whom we can borrow money for my heart operation”. I was desperate, despite being discharged and allowed to continue my medication at home; that agony every time the breathing issue strikes made me think I need big money so I can undergo the right operation for my heart condition. I asked my Inay, “can we borrow money from “Kakang Eddie?” 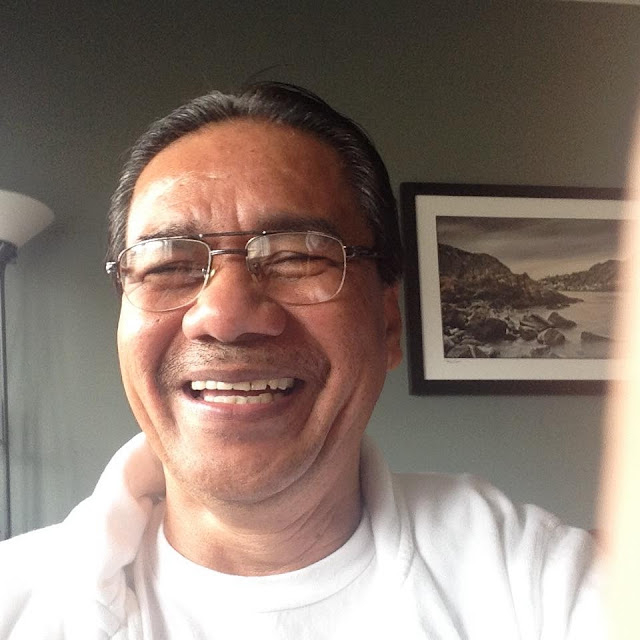 That idea never happened, for my Inay advise me ahead that it might be impossible to borrow that large amount from “Kakang Eddie” by that time for some reason. But then, a few days after that phone conversation, there comes a great news. A sigh of relief for me. My Inay said that “Kakang Cima”, who is “Kakang Eddie’s” wife, suggested that we can go to Philippine General Hospital (PGH) to ask for a second opinion about my condition. I was not aware how the conversation between my Inay and Kakang Cima goes on, but what I was told about is that Kakang Cima has a friend in PGH who can assist us when we go there. A few days after, we were in PGH, entertained by that friend, assisted to the processes in that reliable hospital, and was given a schedule for angiogram - a procedure to check if the heart have blocked arteries. On December 2016, I undergo the angiogram procedure and finally, I was informed there is no blockage and that I have no any heart-related problem at all. That was a miracle!

Thru Kakang Eddie and Kakang Cima, I was given the opportunity to try the good service of PGH.

As a couple, they certainly shared what they can to help me, not in terms of money but in terms of care for a relative of them. It would be impossible for me to go to PGH, got the findings of my initial doctor reversed, and be treated properly with the real disease I have without Kakang Eddie’s “malasakit at suporta” (care and support). Kakang Eddie, thru Kakang Cima, made such recommendation that I should go to PGH for Kakang Eddie once have been admitted and treated well there.

What I can remember is that, on several occasions that I met them, along the roads, in their home, I had only say “Salamat Po” both to Kakang Eddie and Kakang Cima. I know it is not enough. That is why from my heart, I always say thanks to them.

Kakang Eddie have been known to me as a very good, down to earth person. At least for what I know, he’s doing his job by heart and with passion as a barangay captain. Whenever I pay a visit to my hometown, I ask my Inay and Tatay, how’s everything here in our barangay? I remember my Inay saying one time “Aba’y ka daming pina-aayos dito sa ating barangay ng iyong Kakang Eddie. Ka dami niyang natutulungan.” (Kakang Eddie is doing a lot of good projects here in our barangay. He’s helping a lot of people.)

Kakang Eddie was brutally killed in his residence today. Like anybody, we are asking: “why him?” Why such a good barangay captain was killed this way? I know a lot of people in my barangay and even on the nearby places are saddened and shocked. A barangay captain who did his best to little by little transform our poor barangay into something better was killed for some reason, reason beyond our understanding and comprehension. Why?

As a close cousin, a relative, a beneficiary of kindness, of Captain Eddie Panganiban, our beloved “Tatay” of Panghayaan, I am deeply saddened by his loss. From what I know and understand on how things work on this earth, justice is given to those who are denied by it, in due time. To the family of Kakang Eddie, we will seek for it – justice. There could be uncertainty at the moment on when it would be sought after, be granted, but it will come, surely. Be strong Kakang Cima and to all the sons and daughters of our lost “Tatay”. We are with you in these trying times. Evil of darkness could have been celebrating today, but sooner or later, they will find themselves in that place of no return. 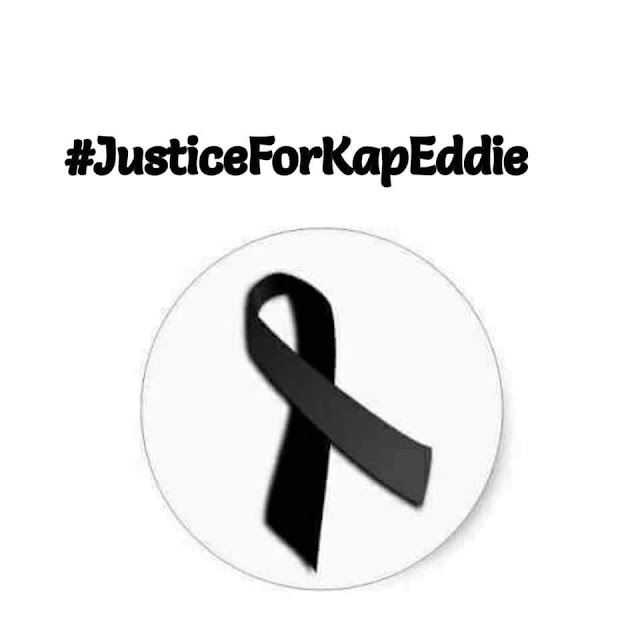 The whole barangay is mourning by now. But in one window, let us look on how brave, kind and loving is Kakang Eddie to lead a barangay like ours, once divided but now united and even better compared before. He did his very best. The good legacy he just left with us has just been engraved among our hearts. He will always be in our memories. He will be happy on wherever he is now, considering the good and kind acts he left us.

God, we are entrusting You the life our Kapitan Eddie. Rest in peace our mabuting (good) Kapitan.

Our beloved Tatay, Pangulo and Kapitan Eddie was finally delivered to his final resting place on December 30, 2018. There was a Necrological Service held in the baranggay's gymnasium. Following that is a funeral procession going to the Baranggay Hall where prayers were conducted. At one in the afternoon, a mass for Kap Eddie was held at Taysan Batangas Catholic Church. At around three, Kap Eddie is on his final resting place. 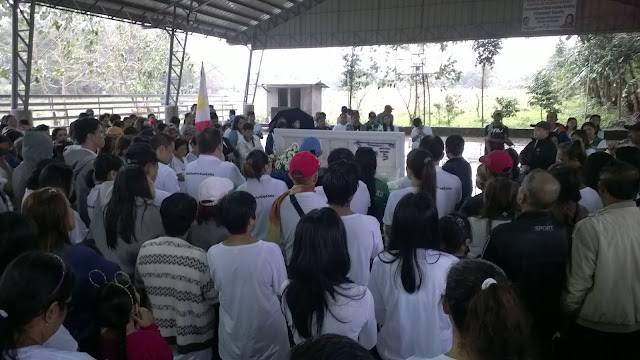 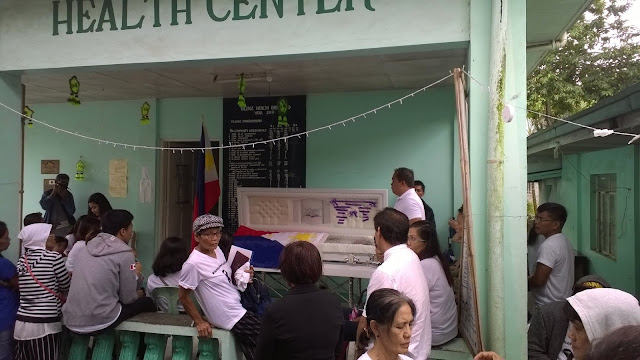 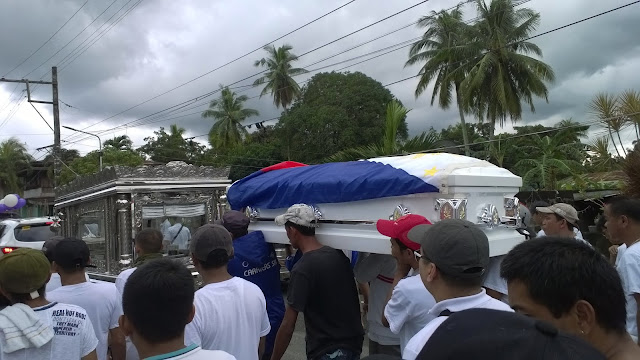 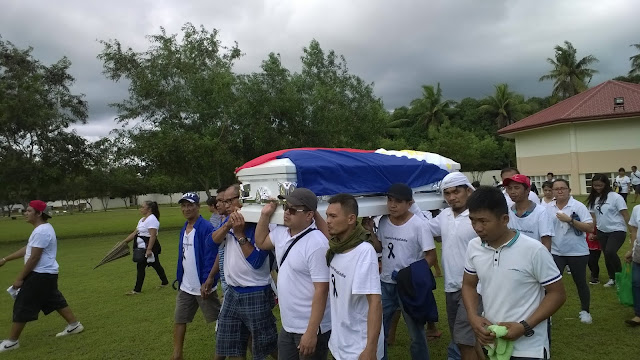 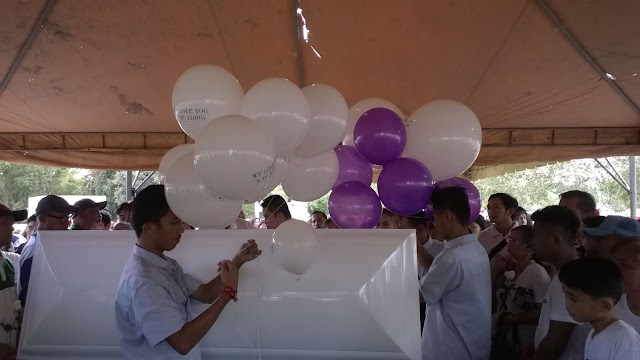